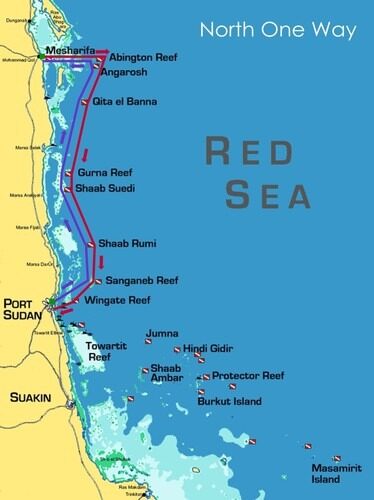 Period: August, from October to mid November, May (weather permitting).
These are special months in Sudan. It is the period of plankton blooms and in the lagoon around Mesharifa Island it’s not uncommon to watch at the marvelous encounters of manta rays eating and mating. Swimming with mantas is an unforgettable experience!
In order to reduce cruising time to reach Mesharifa, the embark can be either in the north at Mohammed Qall with disembark in Port Sudan, or the other way round, embark at Port Sudan cruising north and disembark at Mohammed Qall; land transfers are by private bus.
The itinerary is the same as the Far North one, but with a longer stop at the island of Mesharifa in order to search for Mantas; it will include though all the dives of the Classic tour as well as the ones of the Extreme North, e.g. Angarosh, Merlo Reef, Abington and Quinta El Banna.
At Angarosh we will dive in wonderful soft corals, colourful alcyonarias, walls covered with anemones, schools of hammerheads, greys as well as tiger sharks.
Southwest of Angarosh is Merlo Reef, a beautiful dive site crowded with marine life; shaped in a long vertical wall with small caverns and indentations along the side inhabited by all kind of coulourful fishes, and a canyon which leads to a pinnacle jutting from 25 metres depth up to the surface, where hammerhead, greys and thresher sharks swim along the current.
At Abington, on the wide platform, emerges an old lighthouse; all around the site there are lots of pelagic schools.
Proceeding south we will reach Quita El Banna, a huge madreporic boulder in the middle of the area sometimes visited by hammerhead sharks, thresher sharks and mantas. Further south Sha’abSuedi (wreck of Toyota), Sha’ab Rumi (unmissable) and last but not least Sanganeb with two amazing dive sites (South Point and North Point).
This is an itinerary for those who wants to get the best out of a short time vacation reducing cruising times but for those who wants to discover the beauty of manta rays in Sudan and their magic dances…