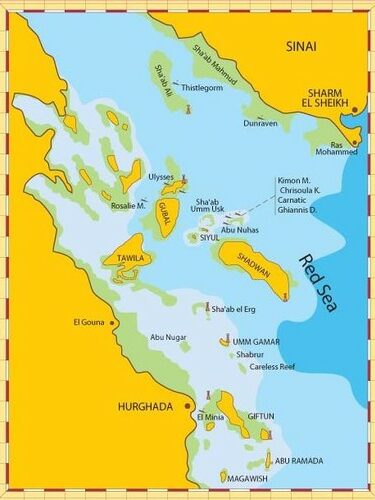 NORTH & DAHAB Departs from and returns to: Hurghada
The route includes some of the best wrecks in the Red Sea, including the underwater museum: SS Thistlegorm. It crosses over to the stunning protected area of Ras Mohamed, the trip visits renowned sites such as the Blue Hole and the Canyon in Dahab. It's a chance to swim and dive with countless dolphins.

The Bells & The Blue Hole: dropped by zodiac near the Bell to begin the dive, this is essentially a drift dive that moves southward until you reach the Blue Hole.

You enter through a break in the reef by swimming over the wall at around 7-5m. You will have time for a little swim in the Blue Hole before heading back over the reef wall to end your dive.

Also a drift dive, the boat’s zodiac will drop you near one of the entrances to the Canyon, where you begin to move along the coral wall in a southwardly direction. Expect to see big colonies of star coral, gorgonians, as well as soft and black corals. You may also come across butterfly fish, angelfish and clownfish.

A reef shaped like a horseshoe, the Dolphin House is an easy, lighthearted dive site that is ideal for recreational diving. As its nickname suggests, dolphins tend to fluctuate there and it is usually quite possible to encounter them and spending a bit of time swimming together.

On the southern tip of the Sinai peninsula, this national park offers some of the best diving worldwide. Due to its location and the varying salinity of the water, a remarkable array of marine life and plush sea walls are found there. Standout reefs include Shark and Yolanda, and whether you are new to diving or you are an experienced technical diver, Ras Mohamed promises a spectacular experience for all.

A sister ship of the SS Thistlegorm, and bombed just the day after, Rosalie Moller is located at 35-55m, making it suitable for experienced divers only. Covered in hard and soft coral, the wreck also attracts a range of species, including barracudas, tuna, jackfish and trevallies; meanwhile glass fish, lion fish and groupers can be spotted inside the wreck.

The SS Thistlegorm is one of the most renowned wrecks in the world, regarded as a giant underwater museum and a special piece of history. Having sunk in 1941 after a bomb attack, today the Thistlegorm lies at 15-30m and offers a playground for divers that includes military trucks and motorcycles as well as boots, ammunition and a lot more.

Visible on the surface, the four coral reefs lined up in a row were named after British cartographers (Gordon, Woodhouse, Thomas, Jackson) and are renowned for their extraordinarily diverse corals. Sightings of sharks, turtles and other big fish are possible, while the remains of a wreck outside the reefs stands as a warning to ships going through the narrow strait.

The four wrecks of Abu Nuhas - Giannis D, Carnatic, Chrisoula K and Kimon M - are all suitable for recreational diving. At a depth range of 5-30m, their proximity to each other is what makes Abu Nuhas an especially notable wreck diving site.

Covered in both soft and hard corals, the wrecks are an underwater dream for the avid photographer. Easy access to the machine rooms and engine room on both the Chrisoula K and Giannas D make it a perfect site for the explorer as well. Abu Nuhas is not only revered for its wonderful wreck diving though, there is also a good chance of encountering dolphins.