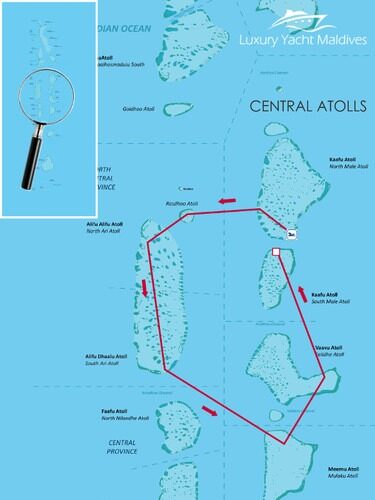 Heading South straight away, sailing within the Eastern edge channels, among which Emboodhoo Kandu, Cocoa and Guraidhoo Kandu, Devana Kandu, Fotteyo, Rakeedho Corner, Vattaru and Mulaku Kandu. From here we’ll cruise the inner portion of the atoll heading to the Southern edge of Ari Atoll, where we will attempt the famous whale shark watching at Maamigili ocean reef. We will then sail northwards through the atoll, without neglecting beaches, desert islands, sandbanks. After the must-see destinations -the most famous thilas, we head back to North Male. On second to last day it will be possible to visit the Capital, Male.